Back Off Mama Bear: Why Slate's Rant Against the Berenstain Bears Was More Than Just Untimely

Tonight, I learned that Jan Berenstain, co-creator, writer, and illustrator of the bestselling children's books, the Berenstain Bears, passed away several days ago. Her husband and partner in the series, Stan, died in 2005. Together, the two wrote more than 300 books, which have sold 200 million copies and inspired an animated television series and more than 20 television movies.


I then made the mistake of reading the article.

First, may I just say: Shame on you, Slate! On the same day the NYT posted Jan Berenstain's obituary, you chose to run an article entitled 'Berenstain Bores'?

This title alone is offensive—because while the author of the piece, Hanna Rosin, and her editor(s), who most likely actually wrote the title, are obviously entitled to believe that the Berenstains', and or their fictional characters, the Berenstain Bears, are boring, the fact of the matter is, the timing of this opinion piece is inappropriate. Not only is it inappropriate, it is downright tacky and disrespectful. The woman just died. She happens to be the co-creator of a beloved children's book series. Tell me, what about her offends you so deeply that a rant about her books seems necessary right now?

Well, let's see, shall we? The article now begins with an update and "apology" from the author:

UPDATE, Feb. 28, 2012: I have been roundly (and deservedly) chastised in e-mails and elsewhere by Slate readers for my use of “good riddance” in connection with this kind woman’s death. I admit, I was not really thinking of her as a person with actual feelings and a family, just an abstraction who happened to write these books. Apologies. Next time I will be more humane. --Hanna

I hadn't even read the article yet, and I found this "apology" utterly ridiculous—"I was not really thinking of her as a person with actual feelings and a family," the apology goes. Um, what did you think, that Jan Berenstain was ACTUALLY a cartoon bear? Of course she was a person with actual feelings! Yes, next time you should be more humane, and your editors should use better judgement as well. Because if they did, this opening would never have been published:


The world today brings news that Jan Berenstain, co-author with her husband Stan of the 45 years and running Berenstain Bears series for children, has passed on to a better world. As any right-thinking mother will agree, good riddance.

Good riddance? Even if by "good riddance," Hanna Rosin was addressing Ms. Berenstain's books, the way these sentences are structured, it reads quite clearly as if she is saying "good riddance" to Berenstain herself. Just read it again if you don't believe me. But, okay: She's talking about the books. Hmm. Are the more than 300 books already published going to magically disappear because both authors are now deceased?

What a revelation! I can't believe this!

DO YOU KNOW WHAT THIS MEANS?!

KURT VONNEGUT IS STILL ALIVE?! SYLVIA PLATH NEVER KILLED HERSELF! [Insert the name of all the countless other deceased authors whose publications are still on bookshelves.]

All right, I'm sorry. I take it back. I'm being a little childish now, aren't I? Maybe I should remember my manners. Oh wait, I have just the book: This is just one of many Berenstain Bears books that my mother read to my brother and me when we were growing up. But according to Ms. Rosin, any "right-thinking mother" would agree that this is just awful bedtime reading for kids. Teaching manners at the dinner table, what a bore!

Here are some of the author's issues with the polka-dot wearing matriarch of the bear family, the beloved Mama Bear:


There, in the big treehouse down a sunny dirt road deep in Bear Country is Mama Bear, known only ever as Mama Bear, wearing the same blue polka-dotted muumuu and housecap in every single book, inside the house and on the very rare occasions when she leaves it. (What’s her problem? Is there no Target in Bear Country? Is she too busy to change? Is she clinically depressed?) Mama Bear’s only pleasures in life seem to come from being the Tracy Flick of domesticity, making up charts for good behavior and politeness, encouraging her children to use pretentious British affections such as 'terribly sorry' and 'lovely, my dear.'

Perhaps I might be equally appalled by Mama Bear being only known as such if all the other family members weren't similarly named. Papa Bear. Sister Bear. Brother Bear. But if only Bear Country had a Target, maybe Mama Bear could have had some time to herself to find a name! Berenstains! You fools!

Then there's the matter of her always "wearing the same blue polka-dotted muumuu and housecap in every single book"—so what? I don't recall Papa Bear ever changing out of his overalls, either. Sister Bear wore the pink overalls, Brother Bear wore the red shirt... seriously, what's the issue? Is it because it was a muumuu? Because of the housecap? The polka dots? I mean hell, I don't like polka dots much myself, but yeesh.

Look, I don't want to fight about this. 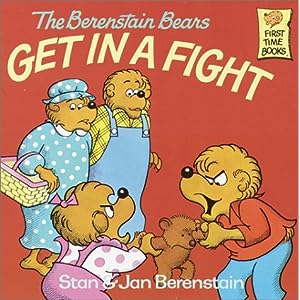 So let's just get to your real issue with Mama Bear, shall we? It's not just those silly polka dots. The article goes on to say:


I have loved many a midcentury book starring the retrograde housewife. Most great Dr. Seuss books were written around the same time. The Frances books are some of my favorites, and Mother in that book never changes out of her apron. And I can read Richard Scarry all day. But usually you need humor to soften the blow. Stan and Jan, sadly, were allergic to humor. This is the only thing I hold against Theodor Geisel, aka Dr. Seuss. He was the one who apparently approved the Berenstain Bears books and yet he never pushed them to write one funny line. Papa Bear for example, is a bumbling oaf. The usual plotline in the books involves Papa trying to fix some problem but screwing it up, so that Mama has to swoop in and save the day. In defter hands, Papa could have been a prototype Homer Simpson. But in these book he just bangs on the table and shouts things like 'pinheaded fiddlebrain!'

What bothers me most is the implication that Mama Bear isn't a good role model, or is somehow lacking because her "only pleasures in life seem to come from ... making up charts for good behavior and politeness, encouraging her children to use pretentious British affections." Maybe Mama Bear's great pleasures in life do stem from encouraging her children, but I don't think it was ever about "pretentious British affections"—as I remember it, from some of my first memories as a reader, and some of my favorite childhood memories with my mother, Mama Bear taught the cubs:

To clean up after themselves and take care of their belongings.

To appreciate what they have and to understand the importance of a family budget. The importance of a healthy diet and exercise. 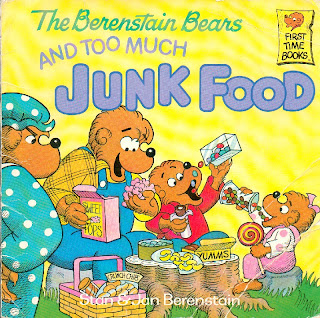 Why it's always better to be honest (oh wait, that 'bumbling oaf' Papa Bear stepped up his game and helped teach this lesson!)

I'm not familiar with the particular book that this author is most annoyed by,  The Birds and the Bees and the Berenstain Bears, but whatever. That same mother who read these books to me and helped instill my lifelong love of reading also sat me down and had a frank talk about "the birds and the bees," so I might suggest you simply ditch the children's books for that conversation if you're looking to be candid.

So back off Mama Bear, her polka dots, and the fact that she is a stay-at-home mom. She might "only" be a housewife, but so was my housecoat-wearing Grandma Hamm, and she was a badass. My mother was a teacher, and I think she, along with about 200 million other readers of these books, enjoyed every minute with Mama Bear and the rest of the Bear clan.

Rest in peace, Jan Berenstain.
Posted by Alison at 10:35 PM