Love, the Shoreline, Where You & I Meet

stole that line from lykke li.

it was too right not to be right, cause that's where i found you last night.

it was la fin du monde, it was the beginning of it all
swimming & floating, the shoreline is nothing new

no matter, you make me do tricks
nobody knows this but us.

lykke has it right.

this beach is rocky, but it won't hurt:
just lay down, you'll see
Posted by Alison at 3:29 PM No comments:

and I feel happy and grateful for so many reasons.

Happy to be sitting in my apartment, listening to old Mariah Carey and drinking Naked Red Machine;

Grateful to have health insurance, a job, and a roof over my head;

Happy to have wonderful friends who listen and care, make me laugh, and drink coffee (and tequila!) with me;

Grateful to have family to celebrate with this weekend, and a wonderful father who still makes me Funfetti birthday cakes;

Happy to be old enough to realize that I control my own happiness;

Grateful that I had a strong, beautiful mother who taught me the power of forgiveness and faith, feminism, and to never apologize for being who I am, but to also admit when I'm wrong;

and happy that tonight, I will be wearing my new hot pink lipstick, a purple skirt, and drinking a margarita!

Now if only I can get my hair to look like this tonight, it will be a successful birthday. Fuck yeah, Mariah! She won't be a prisoner of your love.

Email ThisBlogThis!Share to TwitterShare to FacebookShare to Pinterest
Labels: birthday

Posted by Alison at 6:12 PM No comments:

Did Alison start smoking crack? Is that why she's become the blurst blogger ever, and sort of, but not quite disappeared, then wrote this crazy shit?

Um, no. I didn't start smoking crack. Swear it.

Sometimes, I have really intense dreams. Often, I write them down afterward. Often, I also write somewhat nonsensical poems about them.

Today, I decided to play with it. 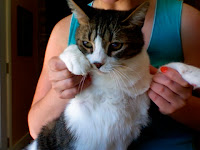 Posted by Alison at 5:50 PM No comments:

A Dream, A Notion, A Poem

A dream:
A little girl with gold-tinted brown curls ran past me in the kitchen, the screen door slamming behind her.

I scolded, and wiped my hands on the apron, but as I looked out the window, she just kept running, hair flying, into dandelion fields.

Chiquita, chiquita banana, I knew her as such. Her name was Anna, I knew this as well. But Anna, my Anna, was too wild and free to just be.

It didn’t have to make sense. Because somehow, I knew her: Even as she ran, her little brown arms and wild curls flapping, I knew her, wild and free. She ran away. And I could smile, knowing, she is there. Somewhere. Beautiful and free.


A notion:
You will think this means something it does not. It doesn't matter. It was only a dream. But it was my dream, and it was everything.

He was creating mermaids
while I was treading water
somewhere in between
the shallow and deep end
needing the salty depths of the ocean
but trapped in this,
a chlorine tub of my own doing.

So I untied the ropes
and plunged,
feeling replacing thinking
knowing I can float freely
here with you
swimming
knowing I could have stayed
but knowing that the act of leaving
only meant I was leaving.

I couldn’t let you be. You weren’t ready for swimming.

They stuck those tiny tubes in my nose
and as I stared into the nothing
I felt a squeeze,
I saw her face again
clearly, so clearly,
just as before.

I can’t see down here,
but I can breathe
I can sink
I can float
how could I have forgotten
that I still know how to kick?

I came to
and I wasn’t sorry anymore
I wasn’t scared
I was just me again, a different me than before.

She doesn’t need those new lungs to keep up
with you up there,
so go, play. She'll teach you how to swim.

And I’ll love you from afar
know that I loved you as I could.

My Anna, my chiquita. My dream.

Posted by Alison at 5:38 PM No comments:

Monday Mix Tapes: Get Some

Lykke Li has a new album. I'm excited about it.

She's coming to Chicago in May! Who's coming with me? (Yes, I know I spend all my money on concerts.)
Posted by Alison at 7:14 PM No comments:

A Story With No End

This week’s New Yorker features an essay by Meghan O’Rourke. You might remember, way back in the beginnings of this blog—you know, years ago, back in February and March 2009—that I wrote about O’Rourke’s Slate series on grieving, “The Long Goodbye.”

In nine well-written, touching entries, O’Rourke wrote about losing her mother, who had suffered from cancer. When I read them, I felt both comforted and sad. In certain ways, I couldn’t believe it: Someone actually got it. Someone else out there felt all these crazy feelings I’d been dealing with since my mother died from an extended illness in 2002. I couldn’t get enough. I read the entries over and over. I emailed Meghan to tell her how much it meant to me. I blogged about it. I talked about it with my brother.

And I was pissed.

This was what I wanted to do with my grief over losing my mother: I wanted to write it. I wanted to share it with others, in the hopes that other young women whose moms had died long before their time would benefit from my story, and it would help them heal. Everything was going to be kumbaya and feelings and butterflies. I would finally think and feel, this is it! This is why I’ve gone through all this. I’m going to share my story with the world! We’re all going to grieve and cry together! Hooray for feelings!

Something like that, anyway. But seriously, this was my new life ambition, to write this book. I even wrote, way back in March 2009, “I’ll continue to love this series unless she steals my book idea.”

I’ve had my book about my mother planned, plotted, and outlined since 2008. I’ve had the title ready since 2007. It’s my secret goal and plan that I will only tell you about if (a) I really, really like you, or (b) I’m drunk. So, not so secret, I suppose. You know, because I really like everyone. I never drink.

Have I written this book yet? No. Well, yes and no. I outline it, write various essays and blogs that I’d like to include in it at some point, then I decide it’s all crap, and start a new outline. This process could go on for years. It already has gone on for years. Yet even so, when Jay sent me the Amazon link to—surprise, Meghan O’Rourke’s memoir, The Long Goodbye—I was furious. I felt like a failure. (Have we met? I’m dramatic.)

No matter that I thought her writing was great. No matter that I was comforted from reading about her mother, and her personal loss. She had done it! My plan. My goal. She had done it, and I hadn’t. What did I think, that no other young female writer had ever had a mother they loved suffer from a terminal illness? Did I actually think no one else had, or would ever, touch on this topic?