The Comfort of Cats 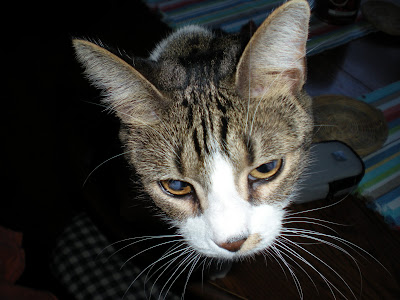 I think one of the reasons I gladly accept being a cat lady is because of the ridiculous joy my cats bring to my life. I know, I know, you're thinking: What a weirdo! You're blogging about your cats?

Damn right I am. Here's why, and why I wanna talk about Miss Layla (pictured above) in particular. She's one of my two cats. (Only two. I swear.)

Back in the day, six years ago, when I'd graduated from college and was about to start real adulthood, I decided the thing to do, obviously, was to get a cat.

I would no longer have roommates. I would be a grown up. I had visions of blissful Sunday afternoons spent curled up in my old hand-me-down chair I'd had since high school, reading a book, drinking tea, with a beautiful long-haired feline perched on my lap, purring.

Not long after I expressed this desire to my Aunt Linda, who had so many barn cats running around the yard that they were impossible to count, she and my cousin Claire told me they'd found my cat. I was in Italy at an internet cafe when I got the picture from Claire of my new kitty. Her name was Mufasa. I beamed. She was beautiful! Perfect!

When I returned home a month later, I eagerly went to the farmhouse to collect Mufasa. But, surprise! Linda had also brought in another kitten, a particularly sick, teeny one, and nursed her back to health. Knowing me, she was rightly convinced that I would gladly take two cats instead of one, especially because this one and Mufasa had bonded. When I first saw the cats, they were curled up, playing on the floor together.

It never crossed my mind to say no. I promptly named her Layla, and took her and Mufasa home. Well, actually, Linda brought them to my Bloomington apartment a short time later, but...details, details. Whatever. The point is, I now had two cats.

I realize that I'm talking about cats, here, so I'll try not to get too weird. Now, I don't play favorites with my children. I love them both. But Layla is this crazy, unique little being. She high fives. She wags her tail like a dog. She has scar tissue on both of her eyes, and she sneezes constantly.

Over the years, Layla's had her share of health problems, the worst being the first year I had her, when I had to give her a course of five different antibiotics. This meant that, twice a day, I had to take my finger and push a pill down her throat. Five times. I became adept at this, and thought with pride that maybe I did have some of my Grandma Hamm's chops. For instance, when I'd go to the barn to collect eggs with Grandma Hamm, she'd just shove her hand under a nesting hen without flinching, and place the eggs in her bucket. Grandma would scoff at my mother's obvious terror of the geese and chickens, and if I showed the least bit of fear while we were collecting eggs, she'd make me follow suit, to my terror. I know that's really not a big deal to all you farm folks, but ask my oldest brother sometime about how this same woman also picked up a possum by the tail. She was a hard ass.

"What are you scared of?" Grandma Hamm would say, as I watched her with big eyes, or flinched as all the animals came running as we threw out the corn.

I mention this, because it's something I say lately to Layla, who has become a bit of a scaredy cat. Yes: 1) I talk to Layla; 2) I just called her a scaredy cat.

One minute, she'll be sitting on my lap, purring. The next, her nails will clamp onto my thigh, and then she'll bolt. I don't know what's scaring her. I try to comfort her as best I can. Because, after all, that's what she does for me.

I'd only had the cats for a few weeks when, one day, I came back to my apartment after a bad day at work, flopped on my stomach on the bed, and started to cry. No more than a minute later, I felt Layla pressing her little paws against my back, one at a time. (I knew it was Layla because Mufasa was perched near my head, staring at me in her cat way.) Layla laid down and started rubbing her little cat face against the back of my neck, purring loudly. I felt better instantly.

I know it's scoffed at, this idea of cat ladies and their blogs, but I'll succumb to the stereotype for today. Because even when Layla claws the shit out of me when she gets scared by something invisible to me, I know that she'll also high five me later, wag her tail, and tilt her head up at me as she sits on my lap, purring and content.

Not long ago, I was really anxious about Layla's odd behavior. But then, right when I needed her the most, she was there. I wrote about it in my journal the next day:


Last night she slept with me, curled up in the crook of my arm like old times.


I held on to her, tight. And laid my face against her fur, feeling the consistent purr, and the comfort of each little cat breath she took.

Look, it's really not even just about the cats. It's about comfort. Recently, I wondered what my friends without pets do for tiny comforts such as these. I wonder how lonely certain nights in my apartment in Bloomington, or Chicago, might have been, had I not had these two furry things to care for and love. 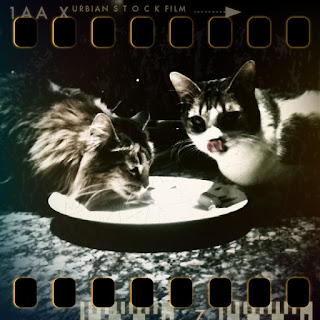 What gives you comfort?
Posted by Alison at 7:30 PM