Yet another example of why my pops is the SH*T 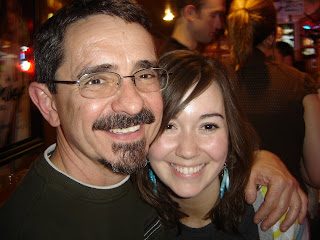 Have I mentioned recently how Poppa Hamm is the coolest? Well, he is.

I was talking to him earlier tonight about my job search, how I can’t pay my rent, and so on. Then I mentioned how I was frustrated because I’d been asked to rewrite an article for my internship (you know, the article I had major writer’s block over)—because apparently, as all writers face from time to time, the editors thought it was way off the mark.

It’s upsetting to get that kind of feedback from an editor any time, but even more degrading when it was an article you wrote for FREE. So my first thought when I got the email to rewrite it was, “I have to prove that I’m not a bad writer! I have to write the shit out of this rewrite!”

But then I started actually trying to rewrite it. This mostly led to me increasing the premature frown wrinkle between my eyebrows as I frowned at the Word document that’s now really brightly colored from all the various editors’ track changes.

So my thoughts changed to, “Why am I doing this?” My internship is over. This company is not hiring me. Outwardly, I said, “Fuck it!” and pushed my Macbook away from me in a hissy fit. Then I remembered I was in a crowded coffee shop. (Of course I was at a coffee shop. And not Starbucks. White people point!)

That was about the time I decided to call my pops. After explaining the situation to him, I asked if he thought I should rewrite the story. His response?

Hee hee. I knew my tendency to say ‘fuck’ a lot had to come from somewhere.

Greg Hamm then proceeded to go on a rant about how if they wanted me to rewrite it, they could either pay me or do it themselves, and told me if I rewrote it for free he would disown me.

Sold. I’m not rewriting it.