My Favorite Redhead! A Tuesday Tribute 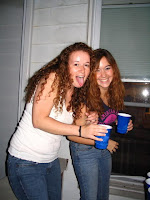 I know I usually do my tributes on Fridays, but today I’m too inspired to wait until Friday. So, ahem: First Tuesday tribute. This one goes out to Abby, aka Bridget Jones.

This morning (and by morning I of course mean at noon, when I woke up), I was dicking around on Facebook to further delay the inevitable bad mood that sets in when I start job searching online.

Anyway, I was thinking about some of my closest friends who, as of late, I’ve done a shitty job of keeping in touch with—namely, my friend Abby, who was my partner-in-crime my last couple of years in Bloomington. I admittedly am bad about calling many of my friends, feel crappy about it, then still don’t just pick up my damn phone and call them. I have no idea why I do this. I’d like to think I’m a pretty good friend in general, but in this aspect, I suck. This is a fact.

It had been awhile since I’d talked to Abby, and I was curious to see if I could get a quick update on what was goin 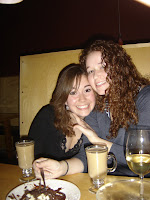 g on with her by going the lazy, bad friend route—checking her Facebook page and her blog. And what did I find? In addition to realizing she and I are both in the midst of a financial crisis and probably should be bonding over it, I also found a pretty badass shout out to my blog! (Thanks, Abbs.)

I’m going to make you go to Abby’s blog to read the nice words she wrote—and not just to self-promote my blog more—but to get some traffic to her blog, which like her, is unapologetically honest, real, and funny. Of course there’s a hell of a lot more to my dear friend “Bridget” than these three traits, but these three are why, I think at least, we became close friends right off the bat that summer we worked at the Four Winds. (Maybe I shouldn’t bitch so much about waiting tables—it seems I make all my closest friends while doing it.)

If you’re around Abby and me for more than five minutes, you’ll learn the following pretty fast: A) We know every line in Clue, and we’re probably going to quote it, while laughing h 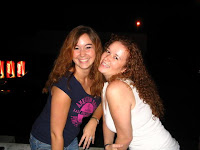 ysterically; B) The same thing goes for Bridget Jones’s Diary and Family Guy; and C) We’re both cat ladies, and we’re awesome.

I learn a lot from Abby. Although in her life, she’s gone through some incredibly difficult times, and too often, she hasn’t been given the love she deserves from people, she never stops caring about them. She’s good to people even when they haven’t done the same for her.

Abby, since we can't go to Crazy Horse and make a spectacle of ourselves quoting this scene while we share a bottle of half-priced Oliver wine, I guess this will have to do: