I found this book last week when I was silently geeking out in the new neighborhood used bookstore, Uncharted Books. How could I not geek out?

1) A used bookstore, in the neighborhood.

2) Huge women's studies section (now this is huge, relatively speaking. This is not a big bookstore. We're talking four or five shelves here.)

I'd been hoping I'd find a good book to buy to show my support/ridiculous excitement over the bookstore's arrival to Logan Square, and then, there it was:

This book was an incredibly meaningful read to me, for obvious reasons. (Well, obvious if you know me, and/or you've read this blog before. And of course you know me! You are either my brother or my cat!)

The author, who lost her mother when she was 17, chronicles her own story of losing her mother while also using interviews with hundreds of "mother-loss survivors" of all ages and circumstances of how they lost their mothers. It explores how losing your mother at various ages impacts a woman (or girl, in many cases) in different ways; how a relationship (or lack of) with your father influences a woman's grief, and reality; the loss of a woman's main feminine role model; how mother-loss impacts romantic relationships. And so on. And so on.

Maybe this would be a better summary: I started reading it the following morning on my commute, and got really choked up reading the introduction.

When my mother died, I knew no woman my age who had experienced mother loss. I felt utterly and irrevocably alone. In college, where new friends knew only as much about me as I was willing to reveal, I told few people my mother had died. Besides being unable to mention her death without breaking down, I was frightened by other people's pity. It marked me as someone different, an outsider, an orphan worthy of compassion at a time when I desperately longed for the anonymity of a crowd. In my dormitory, in my sorority, I felt as if I wore a scarlet letter visible only to me, a personal reminder of what felt like a source of shame. The other freshmen I knew had mothers who wrote letters, sent care packages, and called every Sunday at noon. When the women on my floor pulled their telephones into the hallways, I sat crosslegged on my bed and feigned interest in a human origins textbook. In conversation, I became as evasive as a defensive politician, making deliberate references to "my family" rather than "my parents" and carefully constructing sentences that never referred to my mother in the past tense.

I could have written this paragraph about my own experience, practically verbatim. (Eliminating, obviously, the sorority part.) Throughout the book, there were similar moments. This was incredibly comforting and powerful to read, particularly when I read the stories of women who lost their mother between the ages of 17 and 20, because I could relate to them the most. (I was 18, two months into my freshman year at college.)

But also comforting, in a completely different way, was realizing through these stories just how lucky I was, and am. The chapter, "Daddy's Little Girl" was a little painful to get through (in part because I hate that title). The author discusses four different types of fathers. I got through the first three, including the I'm Okay, You're Okay Father, The Helpless Father, and then The Distant Father, and thought, What the hell? None of these reminded of my father at all. But then I got to the fourth one, The Heroic Father. I hate to admit, at first I was a little skeptical. Really? Heroic? Seemed a bit extreme.


But then she goes on to describe this "heroic" father with various examples:

Samantha's father held a full-time job, headed a household, and attended to his five children's emotional and physical needs. He was a 'heroic father,' and his daughter credits him with the security and emotional strength she feels today...After her mother's death when Samantha was fourteen, her father continued and even deepened his relationship with his four daughters and one son when he became their only parent.


The heroic father typically shared child-rearing and household tasks when his wife was present and had warm, loving relationships with his children before their mother died.


The heroic father isn't perfect and is still prone to bouts of depression or doubt, but he's still clearly a parent in control. Despite his own grief, he manages to maintain a safe, supportive environment that absorbs some of the shock of a daughter's loss and helps her continue developing confidence and self-esteem... Unlike daughters of helpless or distant fathers, who must either withdraw some of their dependency or face disappointment, the daughter of a heroic father has a dad she can depend on. Even as an adult, she typically continues to rely on him for emotional support.

Well, then. There you have it. Heroic is right. Sheesh. My dad's awesome.

Okay, so, that book. Feelings! (But seriously, it was incredible.)

Midway through all this reading about mother-loss, and grieving, and relationships, I took a break to read a different book. It was a wee bit of a lighter read:


I love Mindy Kaling. (You might know her from a little show called "The Office.") I may or may not tweet about her on a semi-regular basis.

I'd read a couple of excerpts from this book already, one published in The New Yorker and the other in Glamour. The rest of the book did not disappoint. In fact, I read it in one sitting. And I LOL'ed throughout. And this introduction was particularly funny:


Thank you for buying this book. Or, if my publisher's research analytics are correct, thank you, Aunts of America, for buying this for your niece you don't know that well but really want to connect with more.

My Aunt Linda gave me the book.

Next up, I'm going to either read A Tree Grows in Brooklyn (I think I read it when I was about 14, but I can't remember, yikes) or I'm going to take my second attempt at reading The Golden Notebook. 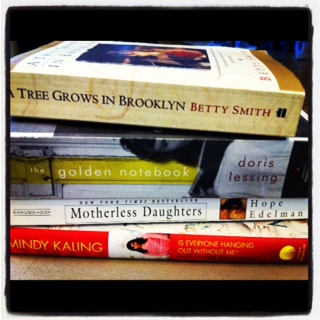 And considering I've run out of episodes of Luther to watch for the time being, looks like it's back to the books.