A Long Overdue “To Do”

I write a lot of “to do” lists. They’re pretty much always the same—and I pretty much almost always still forget, or neglect, to do half of the things on it. But I still get a little thrill when I draw a line through one of them, marking it off: Yoga. Laundry.

One that I haven’t marked off in far too long is one that makes the top of the list nearly every time. That “to do” is “Write Grandma E”—that is, my Grandma Exckhardt, my mother’s mother. Aside from the fact that I’ve run out of stationary for the first time in a decade, I don’t have one good reason to not mark this off the list every time. Especially since every time I do mark that off the list, and drop that letter in the mail, I feel really happy.

This evening, while on the phone with my dad, he rather politely reminded me of this neglect, hinting that maybe I hadn’t been in touch with Grandma recently, and that maybe, just maybe, that might hurt her feelings. My heart lurched as soon as I realized he was right: When was the last time I had written Grandma?

When we got off the phone I paced around my kitchen for a minute, feeling awful. Should I call now? But no, it’s too late—I’ll probably just wake her up. Then I thought, I’ll write her a letter right now. I’ll mail it tomorrow; she should get it by Saturday.

This plan didn’t seem good enough, either, so I vowed to myself that I’d call tomorrow, either on my lunch break or as soon as I got home from work.

I’m bad at keeping in touch. If it weren’t for Facebook and email, I’m sure plenty of people would forget I even exist. I’m that bad.

But: my grandma doesn’t use the Internet. She also doesn’t live in Chicago. She lives in Muncie, Indiana, and she and my grandpa spend the winters in Florida with my aunt. Hence, the importance of the letters or phone calls. Neither of which I’ve been doing.

You should know something about my Grandma E: She is thoughtful.

And when I say thoughtful, I mean thoughtful. One year I told her how good the birthday cake she made for my party was, and she made the exact same cake the following year. Based on one offhand comment! Because she knows how much I love devilled eggs—and hers in particular—she makes some every single time she knows she’s going to see me. Every time. Even if she’s not hosting the get together. She does it because she knows I love them. She has done this for years.

There’s nothing that’ll really make you feel worse than acting less than thoughtful to a person who is always thoughtful to you. Know what I mean?

But it’s more than that. Because there’s another thing you should know about my Grandma E: my mother adored her.

Well, duh—that’s her mother. But, whenever my mom talked about her, whenever my mom was around her, even as a kid, I could feel not only the love between them, but also the respect that my mother had for her. They had a special bond, perhaps not unlike the bond I felt with my mom.


When I was growing up, we lived less than five minutes away from my dad’s parents (and basically that entire side of the family), so we saw more of them than my mom’s parents. They lived in Muncie, an agonizing 40-minute car drive away. (Little did my whiny childhood self know that as an adult, I would regularly be driving for four hours, alone, to visit my family.) On top of that, my mom’s sisters lived in North Carolina and Florida.

It never registered to me as a kid that this might be difficult for my mom. Not even when she alluded to the fact that she wasn’t always a favorite of my Grandma Hamm’s; not even when she would spend up to an hour on the phone with one of her sisters, laughing constantly and shushing me every time I’d try to get her attention. But one time, I remember whining to her, “But do we have to go to Muncie?” and she said to me, looking sad: “It really hurts my feelings when you say things like that. You know, they’re my parents.”

I didn’t make the mistake about whining about that car ride again.

We always spent Christmas Eve at Grandma and Grandpa E’s house in Muncie. That was the tradition, and I loved it. When we’d get there, Grandma and Nannie (my great grandmother) would be in the kitchen. Grandma would be cooking; Nannie would be sitting at the small kitchen table, drinking a Diet Coke and telling long stories that I could never follow. Yet Grandma would always act as if she was telling the most important story ever told. Once we were there, Mom would sit down at the table and join in, sharing Grandma’s enthusiasm. I’d hang around for as long as I could stand it, leaning against my mom, but then my brother and I would escape to the basement to play ping pong.

Nannie died when I was a sophomore in college. I was sad, but mostly, all I could think about was Grandma. Now we had something else in common: Both of us had lost our mothers. Mom had died the year before, just a couple months after I had started college.

For some reason, I kept thinking about something my mom had said to me once when I was in high school, about how she hoped to age like her mother.

“Just because you get older doesn’t mean you have to be frumpy,” she had said. “I hope I can pull it off like Grandma. She always looks good.”

I remember staring at my mom as she said this, trying to picture her with white hair. I couldn’t do it.

“Don’t you agree with me?” she asked.

I wish that I could have seen my mother grow older, and try to “pull it off” like Grandma, always looking nice, still exercising, and having great accessories. Unfortunately, that wasn’t the case. But here I am, wasting the opportunity to talk to my grandma, to write to her and tell her what I’m doing, for absolutely no good reason.

I’ll admit, I feel a little sentimental this week. But hopefully that feeling translates to remembering what’s really important, and staying in touch better with the people who count, like this wonderful woman who is the closest thing to my mother I have in this world. 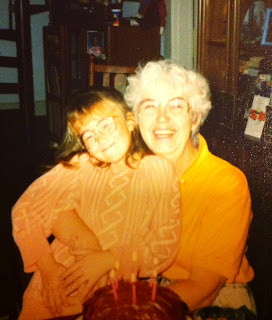 No matter how long I go without writing my grandma, within a week, there’s always a letter from her in my mailbox. She usually begins each one by saying how pleased she was to hear from me. And she signs each one with: “Can’t wait to see you, darling daughter of my darling daughter.