Whatever Will Be, Will Be (Thanks, Corinne Bailey Rae) 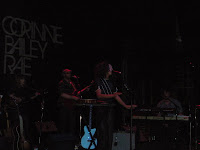 This Thursday I saw one of the most amazing performances of my life: Corinne Bailey Rae at the Vic in Chicago.

It was my first show at the Vic, which was just as great of a venue as I'd heard. We got right in front of the stage, so I had a perfect view of the opener, Daniel Merriweather, who was also terrific. (Check out his song, "Cigarettes"— you'll see what I mean.)

And then, of course, since I had no intention of moving from that spot, we also had a great view of Ms. Rae.

She was incredible. Mesmerizing, in fact. True, I've been listening to her new album, The Sea, pretty much on repeat since February, so that helped, considering she pretty much played it in its entirety. But her voice— damn. It gave me chills. 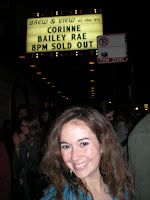 The only low moment of the show was when I finally took a minute to sprint to the women's room, and of course, right when I walk in the stall, she starts playing "Put Your Records On"— I mean, why wouldn't I be in the toilet when she plays her biggest hit? (Same thing happened when I went to see Stephen and Damian Marley. "Traffic Jam" started while I was in line for the bathroom, and finished by the time I was washing my hands. Stupid Bluebird bathroom.)

But that's okay. That song's not even my favorite. When she did play my favorites, "Diving for Hearts" and "I Would Like to Call it Beauty," she played them back to back. I was actually holding back tears during those two songs. Beautiful. Even more beautiful was the lovely pregnant woman standing next to me, holding her pregnant belly, swaying to the music with her partner, and singing along.

Loved it! Right at the time when I was feeling high on more than just Heineken's and great music, she comes back for her encore and blows me away with this: