After receiving yet another fan email asking where the hell I've been, I decided it was time to pull out my Macbook, open the blinds, blast some Eurythmics, and snap out of my Funk. Obviously by 'yet another fan email' I mean my brother emailed me, but that's beside the point, isn't it? If I'm going to become a famous blogger, I probably should, umm, blog.

So where the hell have I been? Sure, some time has been spent holed up in my room streaming Netflix and feeling sorry for myself because my bills keep getting more expensive while I get paid less, but there's also been some crazy shit going on that was deserving of some love in the Rainbow Chronicles. 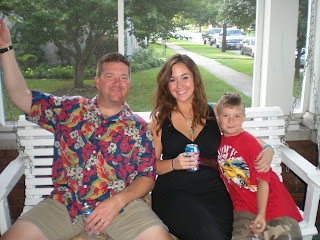 My oldest brother Tom is now in Afghanistan for his second tour of duty, better described as his second year away from his wife and kids. I'm sure he'll come back just fine, but we'll miss him nonetheless. So pray, send warm thoughts, or whatever it is you might do in this kind of situation. Tom is 14 years older than me, so he's basically been my hero since I was a little kid.

He's also probably the only person I enjoy drinking Coors Light out of a can with. The pic here was from the weekend I went home to tell him bye. It was the most time I've spent hanging out with my brother and my nephews in a really long time. That afternoon, Jackson (the one in the photo) said, "Auntie Al, you're not going to a wear a dress again tomorrow, are you?" I learned my lesson. If you want street cred with the nephews who are sporting mohawks, don't wear your hippie-tastic dress. Save it for the outdoor concerts.

What else? Last Friday, I finally lost my virginity to Wrigley Field and saw my first Cubs game. Pretty sure my company was getting a little tired of me saying repeatedly, "Barack wouldn't like this. Barack just wouldn't approve." But other than that, it was a blast. We befriended the guys sitting next to us while we were loudly trying to guess the name of the best friend and the girlfriend characters in Ferris Bueller's Day Off. (Cameron and Sloane, DUH. Although in retrospect, I'm pretty sure I loudly declared that her name was Simone. Shit.)

After the game, we went to one of the silly Wrigley bars, and when we were outside, who should walk by but Ari! I mean, Jeremy Piven. He was with his entourage. Ha, ha. HA! Of course we decide to stand outside and wait for him to leave the bar next door. As he's leaving, we see him take a picture with a couple of girls. He walked out, and as I was working up the courage to speak, my friend asked if he'd take a picture with me.

Jeremy Piven looks at me. I smile. He looks me up and down. "No, but you can have a hat." And he walks away. Hmmph. I was on the brink of feeling pretty rejected, but then I realized: Jeremy Piven gave me a hat! And he's short!

I began parading around Wrigleyville doing things of this nature:

No, I'm not proud of myself. What a stupid hat. Luckily Wrigleyville is full of white girls engaging in even more embarrassing behavior, so for once in my life, I sort of fit in with the crowd.

Basically the rest of my time not blogging has been spent waiting tables, staring at my checking account with my heart pounding rapidly, and to be perfectly honest, feeling a little sorry for myself and watching too much Netflix.

However, I did go see The Time Traveler's Wife with Beth last Sunday! And I can say with complete confidence that Beth is with me when I tell all of you haters this: "Bite me. It was beautiful. Read the book."