Because Mondays are my day off, for me, it’s always a disconcerting way to start the week, one totally devoid of any real responsibility or need to be anywhere outside of my apartment. By early afternoon, I’m restless, irritable, and feel useless: Shouldn’t I be doing something?

I miss Monday afternoons at my old job, because even if I didn’t have a pressing deadline, or a meeting to go to, I was still needed somewhere. I had a responsibility. What I wouldn’t give for some metadata to work on right now! Because even though that was the most boring and mundane aspect of being a content specialist, it still was important for each website. Now the most mundane aspect of my job is a toss-up between stuffing napkin holders and refilling ketchup bottles. Yeesh.

So in recent weeks, I’ve developed a new routine of heading out of my apartment, into the real world, every Monday afternoon. Usually, like today, I take a book to Starbucks. If I’m feeling ambitious, sometimes my journal gets pulled out of my bag and I attempt to write. Just an hour sitting in public, drinking my chai (or my pumpkin spice latte, this week), and reading my book, and my restlessness begins to calm, and I don’t feel quite so useless. I should probably be taking this time to apply for jobs, but that has the opposite affect on my psyche.

But today my Monday ritual got me so fired up that after two hours of reading, I finally had to put the book down. (I’m reading The Women’s Room, by Marilyn French.)


I tried to calm down my racing thoughts by reading some poems from Ariel, by Sylvia Plath, but it’s my mom’s copy from 1973, with her handwritten notes all over it. Seeing my mom’s handwriting typically calms me, comforts me in the same way that laying around in her old Butler sweatshirt does, but today it was a smack in the face.

I had to get out of Starbucks. I put the books in my bag, threw away my empty cup, and hoped that on the outside, I looked like a normal human. But inside, I was feeling a little crazy. I wasn’t ready to go home, though, so I drove to Trader Joe’s and bought myself some cheap wine and flowers. 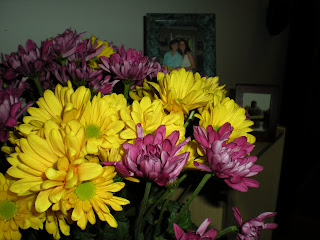 When I got back to my apartment and started arranging the yellow and purple mums I bought, my mind finally stopped racing. The problem is simple: I want to talk to my mom. I have to know if she read this book. I have to know what she thought about it. I have no way of finding out. And this simple fact is making me angry.

When I started reading The Women’s Room this weekend, I was excited, knowing that reading this novel would be similar to when I first read The Autobiography of Malcolm X, or The Feminine Mystique—finally getting firsthand insight to what all the fuss was about, why a piece of literature has the ability to spark movements.

It’s true. I’m only 140 pages into it, but I already know it’s the kind of book that will stick with me. It reminds me of The Feminine Mystique, morphed into this heartbreakingly real and horrifying soap opera of women’s lives in the 50s and 60s—I alternate between loving, hating, pitying, and respecting these fictional women as if they were real people. More so, as I read it, I’m getting increasingly angry at the reality of the injustice that women dealt with back then, and still deal with now.

I desperately want to go search the shelves at my dad’s house to see if my mom had a copy. I really hope I find it on a shelf when I go home in a couple of weeks. If I can find one, it’s the closest relief I can get right now: that means she read it. That means she read passages like this:

She was overwhelmed. This was what it was all about, all the strange things she had been taught. Everything fell into place, everything made sense. And that everything was too big for her. Other girls went to bars, other girls danced. The difference was she had appeared to be alone. That a woman was not marked as the property of some male made her a bitch in a heat to be attacked by any male, or even by all of them at once. That a woman could not go out in public and enjoy herself dancing without worrying what every male in the place was thinking or even worse, what they might do, seemed to her an injustice so extreme that she could not swallow it.

She was a woman and that alone was enough to deprive her of freedom no matter how much the history books pretended that women’s suffrage had ended inequality, or that women’s feet had been bound only in an ancient and outmoded and foreign place like China. She was constitutionally unfree. She could not go out alone at night. She could not in a moment of loneliness go out to a local tavern to have a drink in company. The twice she had taken the train during the daytime, to make excursions to museums in New York, she had been continually approached. She could not even appear to be lacking an escort; if that escort decided to abandon her, she was helpless. And she couldn’t defend herself: she had to depend on a male for that. Even frail, limping Biff could handle such a situation better than she. Had those guys gotten to her, all the rage and hauteur and fighting in the world wouldn’t have helped her.


This passage follows a scene where Mira, the protagonist, has narrowly escaped getting gang raped after her date Lanny abandons her at a bar. Because she feels humiliated, scared, and desperate to convince herself and her male friends that she is okay, she drinks too much at the bar, dances with a lot of men, and then passes out at someone’s house. The only reason the men don’t get to her is because Biff, the only one who has a conscience, locks them out of the room where she’s sleeping.

While I do that, I’m going to make some pasta, drink my wine, and listen to Feist’s “Let it Die” album. 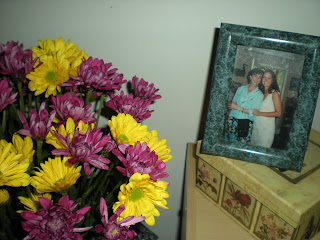 My mom never got to hear it, but I know she would love it.
Posted by Alison at 8:04 PM